On the very last weekend of Farmer's Market season, I wept and wept, and rejoiced at the same time. Wept - for obvious reasons - fresh herbs, giant heads of cauliflower, multicolored tomatoes, and gourds of all shapes and sizes all done for the season. BUT, the biggest surprise of all was that I found 2 great finds - red adzuki beans and... dun, dun, dun, purple yam! Or, purple Yummm! 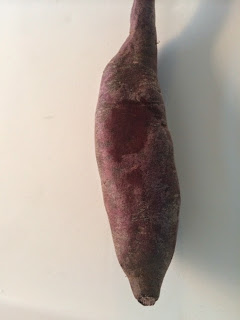 Purple yam, ube in Tagalog, is one of my favorite Filipino flavors. While I'm not that fond of the yam itself, I, along with most Filipinos, loooove all sorts of ube treats. While kids in the US grew up on candy corns and chocolates, I remember running with my 25c to stores to buy ube candies, ube polvoron, and ube pastillas. To this day, whenever I'm in California, my sister and I hunt around the state (San Diego, L.A., etc.) to find the best ube polvoron in town. This reminds me of Philippine fiestas and Christmas season when halayang ube (molded solid jam dessert) becomes ubiquitous in fish shapes - no rhyme or reason for this shape. And summers in the Philippines are not complete without halo-halo with ube ice cream on top. Ahhhh...
So, with about 2 or, I don’t know, maybe ~25 lbs of purple yam hauled from the farmer’s market, I stingily planned things I should make. I patiently roasted these gems, peeled and mashed them to this delightful mass. Isn't it beautiful?


After that, it was time to make things out of it. First out of the oven was the ube version of Taro rolls, which I have been craving for a while now. Due to the dearth of Korean bakeries in the Twin cities, I was forced to make 3 dozens of these suckers. My youngest daughter loves these, but I froze a dozen for future emergency ube roll cravings. This is best serve warm and with honey.

Next I made ube loaf alongside rye pumpkin bread. Interestingly enough, the ube bread came out almost emerald green, which got my brain cogs turning.


Most folks know that potatoes and yams are a good source of carbohydrates, proteins and vitamin C, and contain phytochemicals, including polyphenolic compounds such as flavonoids, tannins, stilbenes and lignans, which are best known for their antioxidant properties. Although I think most people associate these compounds more with wine. Seriously. Hmmm. Anyway, the media has highlighted different studies showing the decrease in the risk of chronic diseases with consumption of these colorful tubers. As such, different shades of potatoes are starting to appear mainstream. Anthocyanins are the ones which give the vibrant color in pigmented potatoes and yams. However, these compounds are not very stable and are sensitive to pH, light, oxidation, enzyme activity, concentration, etc. especially depending on storage conditions, processing and cooking methods. So, the levels of polyphenols found in raw and cooked yams and potatoes are different, which also explains why my ube loaf was no longer purple. Also, if you heat a slice up in the microwave, it turns bluish green!

Apparently, different cooking methods also has different effects on the anti-oxidant activity. This symposia paper shows the ranking as it relate to the antioxidant activity of the unpeeled potatoes: boiled > uncooked > steamed > microwave > baked. A significant increase of the antioxidant activity in boiled potatoes and a significant decrease in the baked potatoes was observed when compared with uncooked potatoes. Hmmm. Boiling seems to be the most promising method for preserving the bioactive compounds. But, doesn’t that also take away the taste the most? Something to consider anyway.

After I’ve settled that mystery, I went on and made my ube jam. It’s not very onerous if you have a hand-held processor, but it does take a lot of patience to keep stirring so the jam doesn't stick to the bottom of your pot. 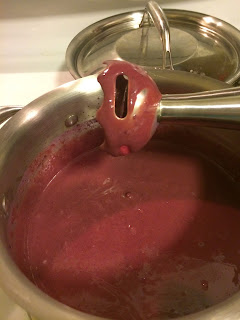 After putting away 2 bottles of the jam, which won't last me the whole winter through,  I went on to make the best treat of all, saving the best for last – ube pastillas.I know that technically this should be made with carabao’s milk, but I have to settle with what I have on hand. 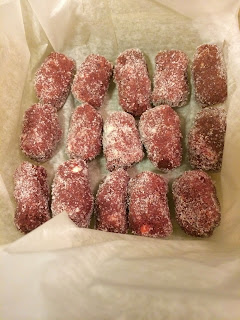 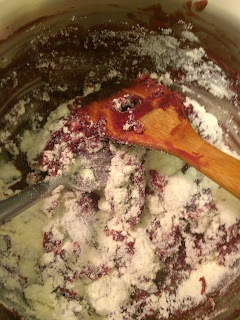 And they turned out so delicious! Who ate the last piece of pastillas?  Guilty, as charged.  That, my dear, is how you settle an ube-craving for good! Is it Farmer’s Market season again yet???
Posted by Jen I am at 3:09 PM No comments: Links to this post

Jen I am
Runs on caffeine, runs after deadlines and kids.

Posts from the past

My most read posts